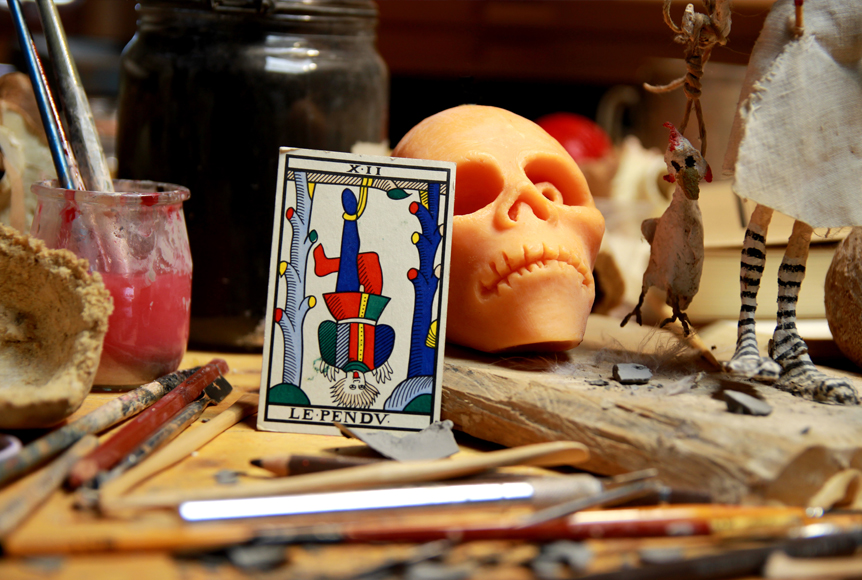 LA PENDUE, theatre company, puppets and sensitive metaphors, was first created in 2003 in Grenoble FRANCE, by Estelle Charlier and Romuald Collinet, two ex-students of the Charleville- Mézières’ “Ecole Superieure Nationale des Arts et de la Marionnette (year 1999-20020)
Being managed by the “Théatre de l’homme ridicule” Association, it has built its workshop, athanor and rehearsal room on the Grenoble heights. From this great altitude the company declared its main focus from where to start exploring.
One traditional focus centred on the hand puppet with which puppeteers reclaim the 400 years old character of Punch for an explosive performance of Poli Dégaine
One contemporary focus used a lot of different techniques (string puppets, carried puppets, shadow puppets and others not yet defined) for the performance TRIA FATA which was screened as a big poetic escape, like LA MANÉKINE, a psychedelic caricature of a medieval tale.
Both focuses were created from the desire to distinguish the original human being using his double.
From touring all over the world, the company created prestigious collaborations. These included :
-Ilka Schonbein,with whom Romuald Collinet was the artistic adviser on “la vieille et la bête”.
-Leo Carax, with whom Estelle Charlier and Romuald Collinet created the character of ANNETTE : face, growth and magic, for the film of the same name.

At the end of the string…

Puppeteer, Actress and Plastic Artist.
Introduced very young to the performing arts and the living tales, she had already played something like a hundred characters and tried many techniques when she started studying at the Conservatory for Dramatic Art in Grenoble. But, in a Eureka moment she discovered the artistic form summarizing and accomplishing all the things for which she had always had a passion: the puppet. In order to fully devote herself to puppetry, she started to study at the ESNAM of Charleville-Mézières, where she met Romuald Collinet and created with him the company La Pendue. Admiring the poetic mystery of the puppets, she likes to defy the abyss with a makeshift theatre able to cause emotional outpouring of a special quality.

Theatre Director, Puppeteer
Whilst very young Romuald was introduced to the performing street arts and the most adventurous Bohemia, and at the age of 17  he  started making money with his street puppetry performances, that lasted about ten years. He later studied at the ESNAM of Charleville-Mézières but left that school to study the mysteries of Punch, driving him to create his own version in the hubbub of the Neapolitan streets. Thus nourished with this popular tradition, he met Estelle Charlier to work on new translations of Punch as well as more contemporary  creations at the forefront of live performances ,  TV and Radio for La Pendue. He sees the puppet as the means of personal growth seeking to free his mind while manipulating artificial entities.

Musician
After a year in the “Scuola Teatro Dimitri” in Switzerland, Martin goes off in 2001 and creates The Pumcliks Orchestra, a musical trio that has since travelled and worked across Europe to this day. Martin has also travelled and worked as a one-man-band under the name of Martin Kaspar Orkestar, and has been seen and heard playing in many different countries from where he has brought back new melodies. While faithfully working with his traditional family’s instruments as a minimalist virtuoso, Martin has also been traveling as a creative member of LA PENDUE since 2015 for whom he composes as many varied tempos as to fit with the different inner landscapes created by the company.

Lighting Engineer and General Manager
Anthony fell in love with live performances from having participated in various associations in Valence FRANCE and started training in Sound and Light at the GRETA of Aubenas in 2001 with many tutoring periods with local agencies. From then on he started a long chain of creative tours including music, young public, new wave circus, and finally the puppet medium with the company LA PENDUE. Anthony is also the co-creator and polarising technical director of the association Deviation which carries the Meetings of the Worlds Festival.

Administrator and Production Manager
A graduate of ESRA film, radio and television productions as well as  in marketing techniques, Patricia has worked for over 15 years in documentaries, fictional  series and animation for television and the film industry. In 2016 she decided to change her landscape and to use her experience and skills in another artistic domain that would take her back to her love of live Puppet performances. She then trained at the IESA in Lyon, after which she joined the Festival de l’Arpenteur team in July 2017. This is when she crosses paths with LA PENDUE. This meeting will be the beginning of a beautiful collaboration.

Sound Engineer
As a young child Andi already walked about with his mic. As a teen he played guitar in a rock band for a while until he got involved with a theatrical project that took him back to his love of audio engineering. While studying sound Engineering, Andi toured with various music bands, gipsy, klezmer and traditional folk bands where he got acquainted with acoustic instruments. It was on one of these tours with THE PUMCLIKS ORCHESTRA that he met Martin, and through him, connected to the performance of TRIA FATA and LA PENDUE. Since that point in time Martin and Andi have collaborated like a hand in a glove.